Suffering for the Sake of Beauty: Chinese Foot Binding 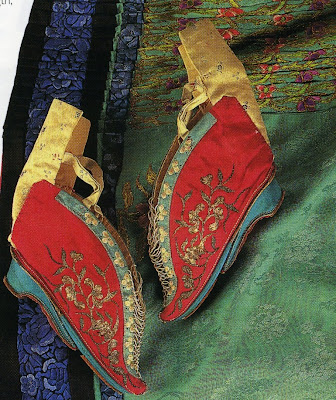 The ancient practice of Chinese foot binding is a classic example of how women will suffer for the sake of beauty. Recently I attended a lecture on Chinese foot binding at the Bata Shoe Museum. The speaker was Joan Judge, a York University professor, who launched her book "Foot Binding and Chinese Modernity: The Demise of One of History's Most Enigmatic Practices" by Stanford University Press, 2008.

This woman to woman practice (men were not involved in any way) began when a girl was 5 or 6 years old. Her mother would bind the girl's feet in a bandage 10 cm by 4 m long. The toes would be broken and pushed under with the toe and heel forced together to mold the foot into an ideal lotus shape with a pronounced arch, a pointed toe, and ideally a length of 3 inches. These bandages had to be worn continually and were perfumed to cover up the smell of rotting flesh. On top of the bandages were layers of wrapping. Foot binding was banned in the early part of the 20th century as a result of political, social and educational reforms in China (which is the subject of Joan Judge's book).

After Joan's talk, the audience initiated a discussion of the extremes of beauty that modern women subject themselves to. High heels seem to be de rigeur at fashionable galas and soirees. I'd always considered myself fairly sensible on that account, except when I found myself with aching feet at a performance of the ballet Cinderella (the ultimate irony!). I was wearing a pair of beige 3-inch heels that looked fabulous but left me crippled by my shoes. And even though I sat through the performance with my shoes off, as the hours passed I could barely mince along the few steps to the lounge. There I was unable to walk and was suffering for the sake of beauty, just like a Chinese woman with bound feet! 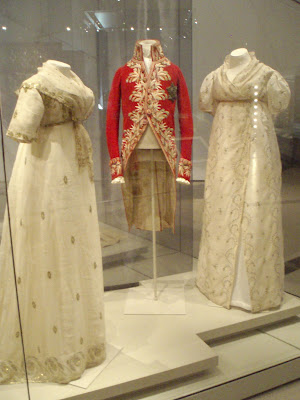 I attended a lecture called "Exhibiting Fashion" at The Royal Ontario Museum on May 7th. There were two speakers: Dr. Alison Matthews David of Ryerson University School of Fashion and Dr. John Potvin of the University of Guelph.

Dr. Alison Matthews David talked about the development of fashion magazines as a cultural force which disseminated idealized scenes of the elite class. She showed photos of illustrations from the Gazette du Bon Ton, a Parisian journal from 1912-1925. This journal was a collaboration between seven Parisian haute couturiers (Cheruit, Douillet, Doucet, Paquin, Poiret, Redfern and Worth) and the finest fashion illustrators of the time. The illustrations showed a day in the life of a Gazette fashion plate. This of course required several changes of clothing a day for activities such as shopping, attending the races or polo matches, going on promenade or to an afternoon tea, and attending an evening event like a ball, a concert, or the theatre. The journal included ten illustration plates with each issue and cost 100 francs a year, making it accessible only to the very rich.

Dr. John Potvin, a professor of art history at the University of Guelph then spoke about the importance of showing fashion at museums and/or art galleries. The point of his talk was that clothing and fashion are more accessible to people in a way that paintings are not. He attributed Diana Vreeland's involvement in the spectacular exhibitions at the Metropolitan Museum of Art's Costume Institute for giving credibility to fashion as a work of art in and of itself. (Apparently Vreeland once said "I want to be drowned in beauty." I can totally relate to that!!)

Throughout his talk, Potvin discussed three inherent conflicts between museums and fashion exhibitions, specifically:
1. the commercialization of museums vs. curatorial practice
2. entertainment vs. education
3. past vs. present

Potvin illuminated his point by commenting on the Chanel exhibit and the Nan Kemper exhibit at the Costume Institute of the Metropolitan Museum of Art in New York, the Armani exhibit at the Guggenheim, and the Fondation Pierre Berge-Yves St. Laurent in Paris. He seemed to prefer the exhibits where curators provided a context for the displays (ie, showing clothing alongside paintings, furniture and other relevant cultural objects). And yet he also said that he loved the Armani show which had no backdrops and had several gaps in the archive because it was like looking in his closet through time.

The speakers made intelligent arguments for fashion being a significant cultural force worthy of museums and art galleries. I believe that fashion is a work of art in and of itself and it was nice to get confirmation that my passion for fashion is not a frivolous affair.
Posted by Ingrid Mida at 7:28 AM 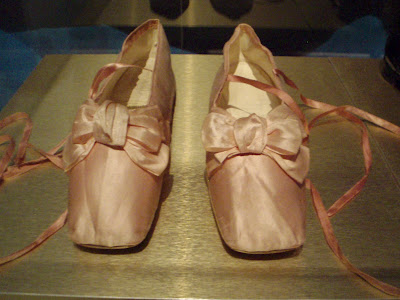 I love to dance, but rarely seem to get on the dance floor. I usually wear high heels when I attend a gala event and end up having to forgo dancing because my feet hurt! And as much as I like to dance, I just don't feel that glamourous in flats.

But when these pretty little slippers from the 16th century were in fashion, ladies could take a whirl on the dance floor without worrying about spraining their ankle. This pretty pink dance slipper was a precursor to ballet pointe shoes.

I learned all about ballet shoes at the "The Rise of the Ballet Shoe" an exhibition on at the Bata Shoe Museum until September 28, 2008. On display are ballet shoes from Marie Talioni, who is considered the first French ballet dancer to "block" her slipper in order to be able to dance on pointe as well as shoes from Margot Fonteyn, Karen Kain, Veronica Tennant, Rudolf Nureyev and others. This delightful display is a must see for ballet fans and shoeaholics of all ages.