The Costumes and Wigs of Semele

In a fusion of Chinese theatre and European Baroque, the costumes of the Semele, an upcoming production by the Canadian Opera Company, are sumptuous in their rich colours and luxurious fabrics. In a behind stage press preview, I got to see them up close as well learn more about the making of this opera. After what I've seen, I'm predicting it will be a spectacular run.

Not limited by convention, Zhang Huan has brought a 450 year old temple to serve as the stage centrepiece. This is not a recreation, but an actual Ming Dynasty temple that has been painstakingly reconstructed. When Zhang Huan purchased the temple in 2007, he had it moved, piece by piece, to his studio in Shanghai. During that process, he discovered the diary written by the temple's previous owner, Fang Jixin, in which he records his anger and frustration over his wife's infidelity. Fang Jixin murdered his wife's lover and then was sentenced to firing squad. To reflect the duality of reality and theatricality, the wife of Fang Jixin has actually give a part in this production.

This COC production has all the elements of opera that I love - spectacular costumes, magnificent sets, top notch performers, plus the added drama of the opera itself intertwined with history.

I've been quiet on the blog front of late, because I've been deep into my research for my thesis, which I hope might one day become a book. I created these two posters to illustrate my project which is entitled Art, Fashion and La Parisienne.

My work was inspired by a painting called La Demoiselle de Magasin (The Shopgirl) by James Tissot which is in the collection of the Art Gallery of Ontario. I soon discovered that this painting was one of fifteen large scale works in a series called La Femme à Paris painted by Tissot in 1883-85. Tissot made plans to issue series of etchings of the paintings, which were to be accompanied by short stories by leading authors of the period, including Émile Zola, Paul Bourget, Charles Gounod, and Alphonse Daudet. Despite Tissot’s earlier success as a painter, this series of highly polished paintings was not well received in either Paris or London. Tissot abandoned his plans to create prints of the paintings and the accompanying short stories. 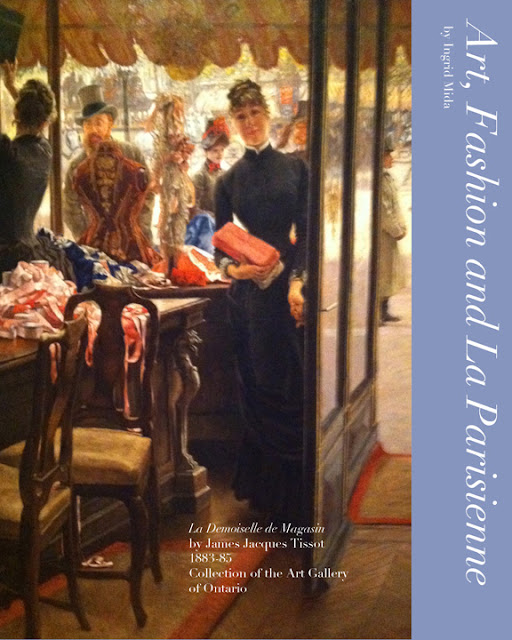 La Femme à Paris  is a provocative series of narrative works showcasing the modern Parisian woman during a period of rapid change in the nineteenth century.  The series illustrates women from a range of income levels and occupations, rendered in precise detail using high key colours.

During the latter part of the nineteenth century, fashion and art were closely linked in Parisian society. Fashion was a subject of study and inspiration for artists, playwrights and poets. Descriptions of outfits worn by society women to the theatre, the opera and other social gatherings were routinely reported in the press. Many artists in France were influenced by the writings of Charles Baudelaire on fashion and modernity, especially his essay “The Painter of Modern Life” which was published in instalments in 1863 in the newspaper Le Figaro. In this essay, Baudelaire identified fashion as a way that artists could capture the processes of modernity in their work.

Using James Tissot’s series La Femme à Paris from 1883-85 as inspiration, my research will encompass an analysis of a selection of artworks, fashion plates and gowns from 1874-1886 to illuminate the intersection of art, fashion and modernity in the theme of la Parisienne.

I'm heavily immersed into my research, and I find the work utterly captivating. I now understand the origins of the modern icon of la chic Parisienne, images of which regularly grace the pages of blogs like French Essence, Fashion, Art and Other Fancies, Style in the City and of course, The Sartorialist.

Opera Atelier: The Spectacle of Armide

Opera Atelier's production of Armide, a tragédie en musique, is, in my view, a spectacle worthy of Versailles. First performed in Paris at the Théâtre du Palais-Royal on February 15, 1686, with scenery by Bérain, the Toronto-based Opera Atelier has layered the Middle Eastern aesthetic of the story over a Baroque sensibility, creating a feast for the senses. Captivating from start to finish, this production opens tonight in Toronto and runs until April 21, 2012. In May, the company takes Armide to Versailles, followed by a summer run at The Glimmerglass Festival in New York.

My Upcoming Show at Loop Gallery 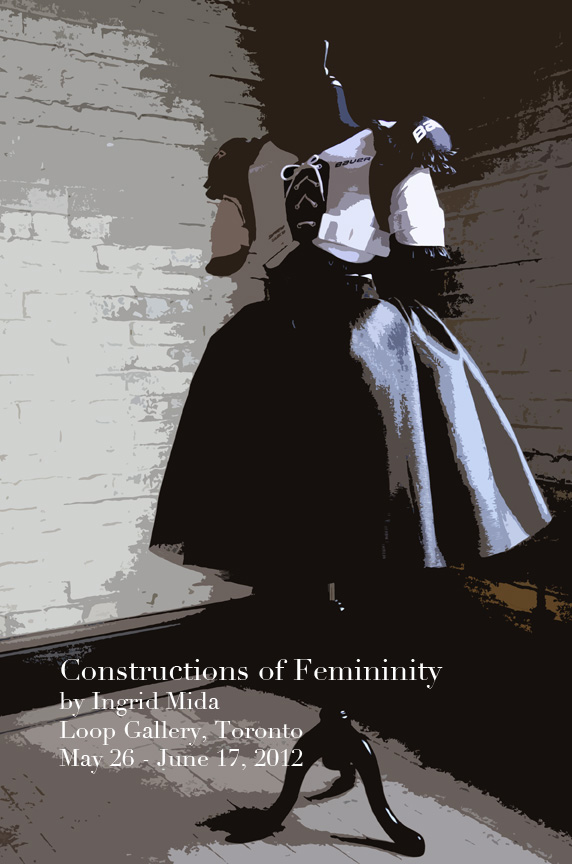 My upcoming exhibition at Loop Gallery in Toronto is entitled Constructions of Femininity and will run May 26 - June 17, 2012. In this exhibition, I explore the constructs of feminine dress and identity through photography, sculpture and textile works.

In this piece called "Samantha", hockey equipment has been transformed with feminine signifiers of ribbon and sequins and paired with a romantic tutu made out of armour-like mesh. The hockey-themed sculptures have been created to honour the young women hockey players who have redefined femininity to include feats of courage, strength, and power.

What's on the Fashion Calendar for April

In Comme des Garcons: White Drama, designer Rei Kwakubo has choreographed an installation in which the drama of fashioning life's events - birth, marriage, death, and transcendence - is celebrated through the use of pure, ceremonial white of every hue. The exhibition includes: budding flowers, layered handkerchiefs, overcoats, a wedding gown like the silky cocoon of an insect, and other "fashion architecture" created by Rei Kawakubo.

In Christobal Balenciaga, Collector of Fashions, items from the private archives of Balenciaga, including stays, boleros, capes, bustles dresses, mantillas, embroidery samples and other items, are presented alongside forty haute couture coats and dresses designed by Balenciaga from 1937 to 1968. The exhibition also includes photographs and sketches as well as books on art and costume history as evidence of the designer's passion for history.

Curated by Olivier Saillard, these two exhibitions promise to be visually and intellectually enchanting, and will open to the public on April 13, 2012. I was invited to the opening party, but will not get there until later in the spring.