God Save my Shoes 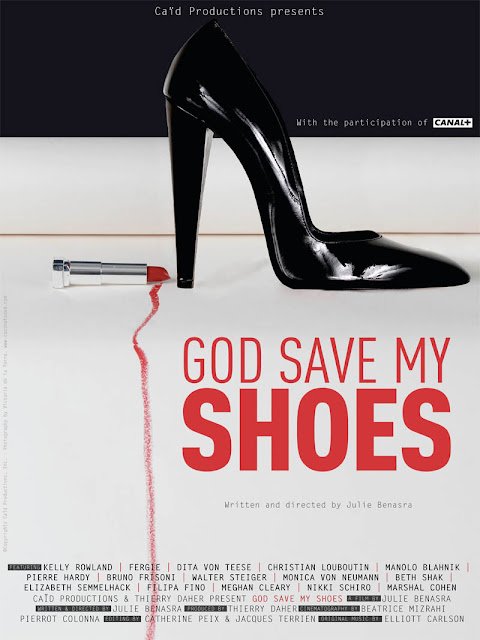 The Bata Shoe Museum hosted a preview of God Save My Shoes, a documentary film about women's passionate and often obsessive relationship with shoes. The film features top shoe designers Christian Louboutin, Manolo Blahink,  and Bruno Frisoni, as well as women shoe lovers/collectors from New York, Los Angeles, Paris and Milan, including Dita von Teese and Fergie. Experts, including Dr. Valerie Steele, Director and Curator of the FIT Museum, and Elizabeth Semmelhack, Senior Curator of the Bata Shoe Museum, give thought-provoking interviews on women's obsession with high heel shoes.

This is the doll that I have decided is my double. I found her in Paris and she is normally dressed in a burgundy knee-length sheath dress with a matching coat and pill box hat. She is smaller than a Barbie, not as tall, not as busty nor as curvy. Her hips are narrow and she is petite, as I am. Her glasses are a match for my own.

My research -- into the uncanny, fashion dolls, wunderkammer, and the museum as a metaphor -- will be translated into designing two outfits for my double that will be placed inside a glass "coffin". The outfits will be constructed from scraps of material from my mother's dresses that I photographed in the series "My Mother/Myself".

Creative Process Journal: The Dress in The Museum

This dress, stuffed with archival tissue, is from a series of works by French photographer Valerie Belin that were exhibited at the Musee des Beaux-Arts in an exhibition called "State of Things, States of Places" in 1997. The work is described in the exhibition catalogue as follows: "These dresses are like bodily remains...still moulded in places to the shape of their former presence, giving the appearance of the body itself." (Muller 78)

Having been behind the scenes in many museums, and having surreptitiously taken a few photos of beautiful things inside museum storage facilities, I am drawn to this photo.... It evokes so many things for me including the duality of beauty and decay, life and death, as well as my affinity for museums and  the ephemeral nature of fashion.

Through my process work for this creative project, I took a journey of surreal wonder. I was inspired by the Viktor and Rolf exhibition and followed that spark into research about Freud's Uncanny, fashion dolls, and the museum as a metaphor.  Although I expected to create something related to fashion dolls, this process work has revealed a different path.
These small glass boxes are like the glass vitrines of a museum. By curating a number of objects in my studio, I have created assemblages of memory. Each box contains objects that were either collected by my mother (tea spoons, watch parts, rose buds) or made by my mother (lace doilies). The doll hands are my own additions to reflect the graceful movement that is no more, since she can no longer make or hold such delicate things.

Creative Process Journal: The Metaphor of the Museum

In contemporary art, context plays a role in defining what is considered art. One of the most well known examples of how this works are Marcel Duchamp's readymades, including the urinal, bottle-rack, bicycle wheel and snow shovels, which were presented as artworks. These mass-produced objects, displayed in the context of a gallery, challenged the notion of "aura" and prestige associated with objects of art. Since Duchamp there have been an array of artists who have used context to define their work such as Joseph Beuys did with the Felt Suit.  Others, like artists Sophie Calle,  Fred Wilson and Cornelia Parker,  have explored the metaphor of the museum as inspiration for their work.


Sophie Calle played with the notion of the museum vitrine in her work The Birthday Ceremony 1991. In fifteen medical-style vitrines, Calle assembled an inventory of items received as birthday presents between 1980 and 1993. Each year on her birthday she had a birthday party, archiving her presents and exhibiting them in this display.

Creative Process Journal: The Cabinet of Curiosities for Fashion

Most museums today offer an aesthetic of pristine perfection. This connoisseurship bias rejects anything showing signs of use (the sweat or stains of life on a dress for example) or items that are broken or damaged. Order, perfection and education seem to be the guiding principles of museum presentations today, leaving little room for imagination and wonder.

This is quite unlike the idea of the Wunderkammer or Cabinet of Curiosities that were popular in the 15th to 19th centuries (see my previous post). These rooms or cabinets were packed full of objects meant to inspire delight and wonder at the juxtaposition of rare and unusual objects. The aesthetic of dense accumulation of objects is rarely seen anymore although I can think of one museum where it still exists (The Redpath Museum on the campus of McGill University in Montreal).

Hans Bellmer (1902-1975) was a German artist, who used self-crafted life sized dolls assembled from a range of materials in photographs which explored erotic themes. He hand-coloured the images and published ten of them in a book in 1934. Bellmer made a second doll in 1935 using the head and hands from the first doll and also incorporating a number of ball and socket joints which allowed the doll to be manipulated into a variety of contortions. The doll had interchangeable limbs and other parts, as well as an extensive wardrobe. He photographed this work in 1935 but it was not published until 1949, in part because his work was considered 'Degenerate' by the Nazis (Wood 316). Bellmer's is associated with the Surrealist movement, and after moving to Paris in 1938, he spent some time in an interment camp in the south of France alongside Max Ernst.

In 1959, when the Barbie doll was first introduced onto the market by Ruth Handler, more than 350,000 units were sold and since then an estimated that over 1 billion dolls have been sold. She has survived a range of assaults, including the firing of Ruth Handler from the company in 1971 and backlash from feminists and women's rights advocates. Robin Swicord, an author and screenwriter, said "In countries where they don’t even sell makeup or have anything like our dating rituals, they play with Barbie. Barbie embodies not a cultural view of femininity, but the essence of woman” (qtd. in Lord 80).


Barbie was a respectable version of the Lilli doll in Germany. Lilli was "a German doxie - an ice-blond, pixie-nosed specimen of an Aryan ideal" that was popular among German men who often placed her on the dashboards of their car or gave the doll as a gift to their girlfriends (Lord 8). Handler recast Lilli as a wholesome all-American girl and marketed the doll to young girls. The rest is the stuff of marketing legend.

Creative Process Journal: The Doll in my Studio

I have a doll in my studio -- a Santos Cage Doll that I purchased a number of years ago in a vintage furniture shop. I didn't even know what kind of doll she was when I acquired her, and only learned later that these types of dolls were used as a form of altar for homes in Spain and Mexico. She has sat unadorned, until now. All this research into dolls has led me to want to do something with her, so I've begun to make her a skirt out of mesh. In the photo you can see the basque for the skirt around her hips. This isn't intended to be the final product of my research, but just one path in my creative exploration.

In the seventeenth and eighteenth centuries, fashion dolls were used by dressmakers as a way of illustrating the latest styles to their potential clients. Dolls dressed in the latest Parisian styles were on display in fashionable shops and also were sent regularly to London and to the courts of Europe. The dolls were considered precious and sometimes even had diplomatic immunity during times of war. Although the most fashionable dolls originated from Paris, dolls were also made up in England and sent to the American colonies, where England was the dominant cultural influence.

In 1919, Sigmund Freud wrote an essay called The Uncanny in which he described the intense feeling of strangeness that can occur when encountering something that is both familiar and unfamiliar at the same time, causing doubt as to whether or not the object is, in fact, alive. The essay begins with a semantic analysis of the origins of the German word for uncanny, which is unheimlich and its opposite, heimlich which means homely. He ties the notion of uncanny to something that is familiar but strangely unsettling, such as dolls, doubles and waxwork figures.


Freud also analyzed the idea of the double in his essay, drawing on the writings of Otto Rank who linked the double to “mirror-images, shadows, guardian spirits, the doctrine of the soul and the fear of death”. Doubles were used in ancient civilizations, where artists formed images of the dead as “assurance of immortality” and an “energetic denial of the power of death”.  Freud suggested that the double “having once been an assurance of immortality”, could also be an “uncanny harbinger of death.” (Freud 142). He also describes the fantasy of being mistakenly buried alive as "the most uncanny thing of all".

The dolls used in the Viktor and Rolf retrospective at the Barbican Gallery in 2008 were based on a nineteenth-century bebe type doll intended as a plaything and produced by the Maison Jurneau in Paris. A Belgian doll maker used real human hair, bisque porcelain faces and paper-mache bodies for the Viktor and Rolf dolls.

There were two sizes of dolls used in the exhibition at the Barbican: 70 cm tall dolls dressed in miniature versions of the designer's collections and life-size dolls dressed in the actual garments. The shift in scale created an Alice in Wonderland illusion and it was somewhat surreal.

The cold perfection and the haunting gaze of the Viktor and Rolf dolls at the Barbicon – both large and small – depicted what Freud has defined as uncanny (and which will be the subject of an upcoming post). Caroline Evans referenced Freud’s essay in the exhibition catalogue and she also pointed out that “the double poses a challenge to the idea of individuality and the doll straddles an uncomfortable boundary between the living and the dead.” (Evans 19).

Notice of copyright: All text and images on this blog are the copyright of Ingrid Mida, unless otherwise noted. The copying of posts, images and/or text without proper attribution is violation of copyright and legal action will be pursued.