In High Fashion: Edward Steichen at the AGO 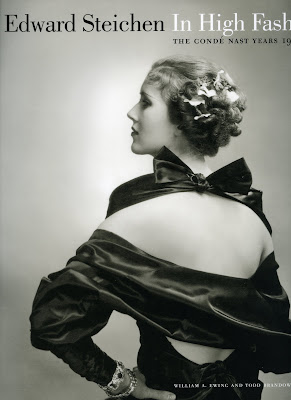 Catalogue Cover, Photograph of Actress Mary Heberden 1935 by Edward Steichen
The AGO is the one of the last stops of the exhibition "Edward Steichen: In High Fashion" which presents a collection of his black and white photographs from the Conde Nast archives 1923-1937. As the chief photographer for Vanity Fair and Vogue during these years, Edward Steichen was instrumental in defining fashion photography and celebrity portraiture. Using light and shadow to delineate his subjects in striking backdrops, Steichen drew on his training as a painter to create arresting compositions of his subjects and is considered the "first truly modern fashion photographer".
I was entranced by the 200 Steichen photographs on display. Exquisite in their execution, the collection leaves no doubt as to Steichen's talent and sophisticated range. Although Steichen also made colour photographs, only black and white images are on display, giving the exhibition a clarity and elegance.
Given my own recent confusion as to the next steps in my artistic path, I found it interesting to learn that Steichen had been a painter before taking up photography. In spite of his successful shows at prestigious galleries as a painter, he had "serious misgivings about his talents with the brush" and was aware of "not having kept pace with the modern styles of painting." Walking away from a medium that he was comfortable with into the relatively new world of photography must have been a challenge to say the least.
The exhibition runs until January 3, 2010. Keep your AGO ticket and show it at the ROM to save 20% off general admission for the Vanity Fair Portraits exhibition.
Art Gallery of Ontario
317 Dundas Street West
www.ago.net
Posted by Ingrid Mida at 7:03 AM 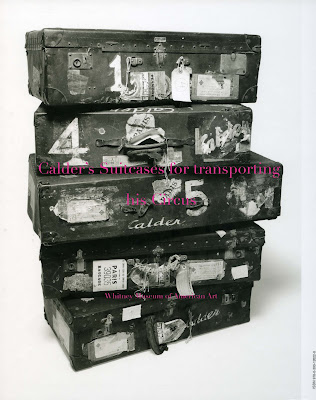 John Sloan, a teacher at the Art Students League once advised Alexander Calder to not be afraid to borrow - "The great men, the most original borrowed from everybody....Little men just borrow from one person" and to "treat as irrelevant the question "What am I doing, is it art?"

This struck a chord with me when I visited the Alexander Calder exhibit at the Art Gallery of Ontario (co-created by the Whitney Museum of American Art and Centre Pompidou Paris). I've been playing with wire in my studio, not knowing what I'm doing, not sure if what I'm making is art. And low and behold, someone else has already done it!

When I think of Alexander Calder, I associate his name with his abstract mobile works, modern and spare in their beauty. But what came before that - the Circus works and the wire sculptures - mesmerized me with their whimsy and sense of play. Wire forms created from the elemental lines that delineate all things (just the way I draw) create shadows and come to life. I was humbled and yet, at the same time, energized.

Of course, I had to buy the catalogue so that I could study Calder's work at my leisure. Created from humble materials, like wire, cork, fabric, thread and paint, Calder created a miniature circus that he animated himself during performances. It was utter magic! 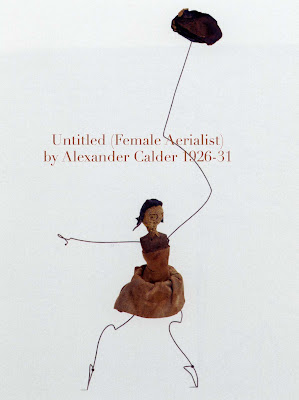 I will have to go back to see this delightful exhibition again! I was simply blown away! Don't miss it! 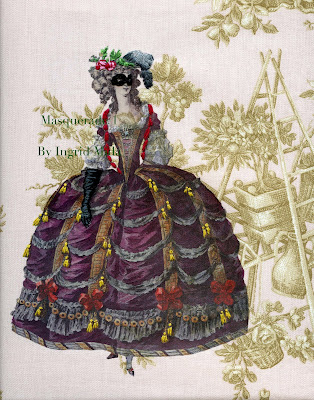 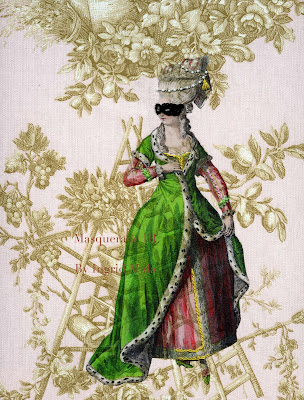 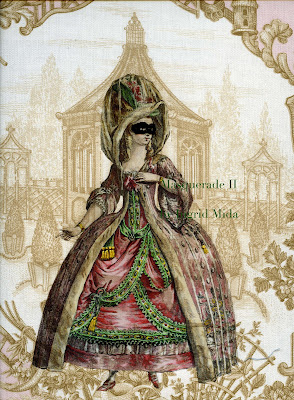 
In support of October's Pink Campaign for Breast Cancer Research, I've created this series of mixed media works called Masquerade. Each piece retails for $150 (plus applicable taxes and shipping). One hundred dollars from each sale will be donated to Breast Cancer Research in honour of my friend Renee who has stage 4 breast cancer and writes the blog Circling my Head.

For more information about the Pink Campaign for the Breast Cancer Research Foundation, please see their website at www.bcrfcure.org. To see other blogs involved in the Pink Campaign, check out http://pinkforoctober.org.
Posted by Ingrid Mida at 7:18 AM 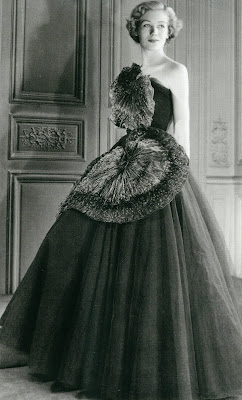 In spite of its impracticality, the crinoline has occasionally resurfaced in contemporary fashion. In the post-war period, when traditional female roles were emphasized and female curves were celebrated, Elsa Schiaparelli, Balmain, Christian Dior, Jacques Fath, Yves Saint Laurent and others created gowns mirroring the influence of the bell-shaped skirts of the Second Empire.

More recently, designers have used the crinoline for inspiration. Vivienne Westwood designed a whole collection called the mini-Crini collection in 1987. John Galliano created a gown in black silk with a skirt nine feet wide in 1998 and Alexander McQueen created this spun-sugar-like shell reinforced by plastic in his 2000 collection for Givenchy. 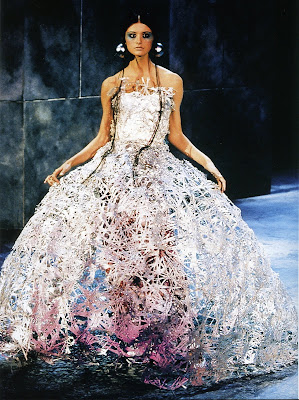 And check out this confection from the latest collection of Giles Deacon. 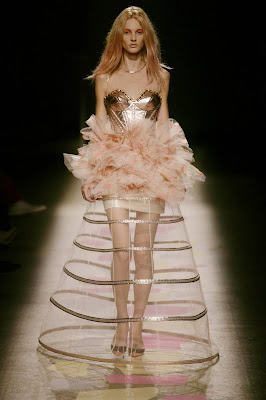 A crinoline is a beautiful object in and of itself and creates a striking sculptural effect. And those that chose to wear them, whether for bridal wear or a fancy dress ball, can swish about in their full skirts celebrating the timeless element of seduction created by a garment with a heightened sense of femininity.
Posted by Ingrid Mida at 8:10 AM

Symbolism of the Crinoline 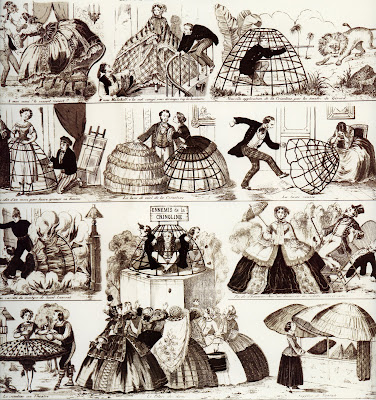 Fashion historians have ascribed different meanings to the enormous skirts of the mid-19th century, which was a period of significant male domination and gender differentiation. Men were considered "serious, active, strong and aggressive" and wore dark clothes with little ornamentation. Women were "frivolous, inactive, delicate and submissive" and wore clothing that inhibited their movement in light pastel colours, ribbons, lace and bows. In one sense, the crinoline symbolized female fertility like all fashions that expand the apparent size of the hips. In another aspect, the huge bell like skirt concealed women's sexuality in a cage and created a form of female imprisonment.

Other fashion historians have asserted that the crinoline was representative of how the bourgeois women adopted a "useful cloak of armour" to mediate the experience of modern city life. The enormous width of the skirt provided a barrier between the wearer and everyone else. This was important in a time in which increasing urbanization and industrialization led to more frequent contact with strangers. In that sense, the crinoline was a modest form of "protection".

In spite of being much maligned in the press, the mass manufacture of the cage crinoline became an important industry and the largest firm W.S. and E.H. Thomson had factories in England, France, Germany and the United States. Technical advances reduced the manufacturing costs and brought crinolines within the reach of all social levels.

As the popularity of the crinoline grew, it began to lose appeal among the fashionable set as they sought to differentiate themselves from the working class. In the mid-1860s, the crinoline began to shift to the back of the skirt, leaving the front skirt panel more or less straight. By 1868, the reinforcement of the skirt had slipped entirely to the back becoming a half-crinoline. By 1870, the crinoline disappeared altogether and was replaced with the bustle.
Posted by Ingrid Mida at 10:03 AM 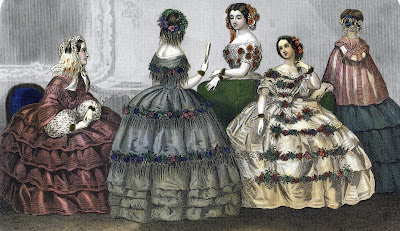 The cage crinoline allowed women to move their legs freely under the cage and was substantially cooler, lighter and more durable than the masses of petticoats that women previously wore to achieve the desired look. The highly structured form of the cage crinoline created a sort of "restless captive balloon" which swayed from side to side and could result in "a certain upward shooting of the skirt" which necessitated the wearing of bloomers and ankle boots.

With the endorsement of leading Parisian couturier Charles Frederick Worth, the crinoline hoop reached enormous proportions in the 1860s. Skirts were umbrella-like with circumferences as large as six feet around the hem. One of the most fashionable women of the time, Empress Eugenie, wife of Napolean III, was called the "Queen of the Crinoline". After seeing the play Les Toilettes Tapageuses in which the main character appeared in a giant crinoline held up by an "enormous steel cage", the Empress sent her maid "to obtain the measurements of the actress's showy dress."

Cage crinolines were hugely popular in spite of the fact that their exaggerated proportions made it impossible for two women to enter a room together or sit on the same sofa. There were also potential dangers since a woman did not know where the end of the skirt was. The buoyant skirt could catch fire from an open flame or candle or become entrapped in machinery. Fashion triumphed over safety and comfort and these enormous skirts were typically worn by all classes of women from 1856-1870.
Posted by Ingrid Mida at 7:17 AM

An Introduction to The Cage Crinoline 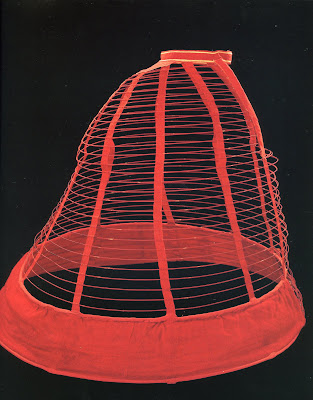 As the skirts of the mid-nineteenth century ballooned in size, women wore numerous layers of petticoats to achieve the desired bell-like silhouette. The word crinoline was initially used to describe a petticoat cloth made of crin (French for horsehair) interwoven with lin (linen). After the 1850s, the word crinoline evolved to describe a "foundation garment composed of graduated steel or whalebone hoops that distended skirts and preserved their shape".

With innovations in the manufacture of steel, the introduction of the cage crinoline in 1856 allowed women to wear the fashionable wide skirts of the time without enduring the weight or warmth of multiple layers of petticoats. The news of this fashion innovation quickly spread through such publications as Godey's Lady's Book. In spite of the many difficulties and dangers caused by wearing enormous skirts, cage crinolines became hugely popular.

The crinoline was not the first time that fashion has emphasized a woman's hips. In Elizabethan times, the farthingale was worn, and in the 18th century, panniers created an expansive hip line. But in the middle of the 19th century, technology had advanced for the manufacture of low-cost flexible lightweight steel hoops to support the skirt structure. Unlike the previous hip expanding garments, the low cost of the cage crinoline made it accessible to all classes of women. Furthermore, improvements in looms and dyes in the textile industry and the invention of the sewing machine allowed the voluminous skirts supported by cage crinolines to be adopted by women of all social classes. For this reason, the cage crinoline has a significant place in fashion history.

Note: The above is an extract of a research paper that I wrote for a course in Fashion, Culture and Society at Ryerson University. I am fascinated with the crinoline because of its importance in fashion history as one of the first garments worn by all classes of woman and also because of its inherent sculptural qualities.
Posted by Ingrid Mida at 6:27 PM