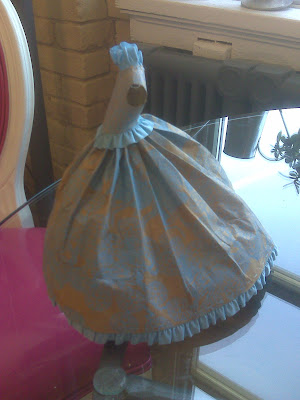 This is my latest sculpture creation, a miniature paper dress in the style of a gown worn in 1639 by Dorothea Maria Von Sulzbach (Bayerisches National Museum).

It took me months of work to figure out how to make paper behave like fabric. I tried numerous times and threw many attempts in the garbage.

To see more of my work, go to www.ingridmida.com
Posted by Ingrid Mida at 6:07 PM

Out of the Vaults: Marie Antoinette's Dress 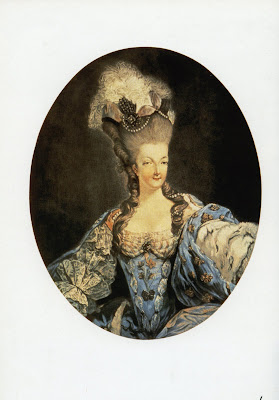 The Royal Ontario Museum has a magnificent costume and textile collection consisting of approximately 50,000 items. Sadly only a very tiny fraction of that is ever on display in the Patricia Harris Gallery of Textiles and Costume.

An upcoming highlight will be the display of Marie Antoinette's dress from 1780 in October for a limited time ONLY (October 11-26).

I can hardly wait to see this dress in person. It should serve as delightful inspiration for my latest series of artwork.

Painting as a Fashion Motif 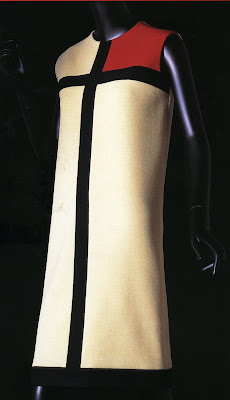 Whether fashion can be considered to be a work of art in and of itself is an ongoing debate among art curators and fashion historians. But it cannot be disputed that Yves Saint Laurent was the first fashion designer to use a painting as a direct source of inspiration for his collections and as a fashion motif.

In 1965, YSL created the "Mondrian" dress which applied the simplified colour blocks seen in the work of the artist Piet Mondrian to a sleeveless jersey knit tunic dress. This deceptively simple design with the graphic blocks of white, yellow, red, blue and black from Mondrian's paintings was considered a masterpiece of construction.

This reference to art in YSL designs was followed up with the "Pop Art Look" in the following year and hand-beaded Van Gogh iris jackets in the 1980s.

Since that first Mondrian dress, many other designers have referenced art in their designs. This past season alone there were countless designers who did os, including John Galliano for Dior Haute Couture (Hand-painted and embroidered dress after Gustav Klimt's Adele Block-Bauer portrait), Marc Jacobs for Louis Vuitton (Sheer dress and slipdress after Richard Prince's Man Crazy Nurse #3), and Armani (Silk-organza petal dress with jewel brooch after Degas Dancers).
Posted by Ingrid Mida at 7:49 PM