Fashionable Lingerie and the Lingerie Française Exhibit at the Design Exchange 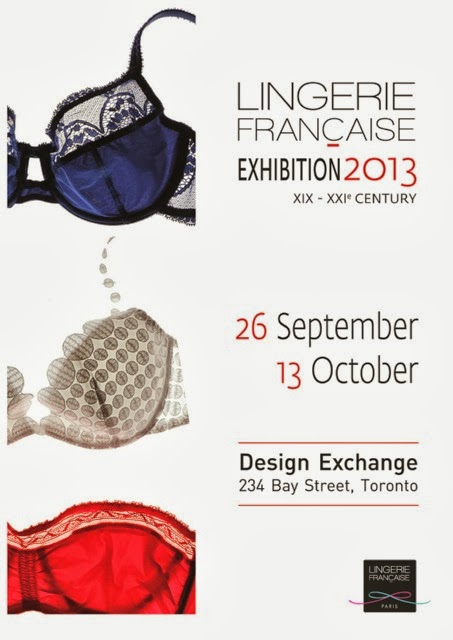 This travelling exhibition, which has included stops in Paris, London, Shanghai, Dubai, Berlin and New York, is intended to convey  the influence lingerie products have been exerting on society from the late nineteenth century up to the present day. The exhibition is sponsored by French association PROMINCOR and Défi-La Mode de France.

Yesterday, I had the great pleasure of having the curator of this exhibit Catherine Orman come to visit the Ryerson Fashion Research Collection. Although I was so tired (from several very late nights working on my book proposal) that I was barely coherent, we chatted about two recent corset acquisitions for the Collection, as well as some of my favourite gowns, including a Pierre Balmain couture gown called Marie Antoinette from 1955-1959 as well as a Lanvin wedding gown from c.1925-35.

The exhibit at the Design Exchange is on now until October 13, 2013. Admission is free.

Memories of a Dress

From London to Chicago.... it feels like a whirlwind. This weekend, I will be attending the Costume Society of America Mid-west conference in order to present my project: Memories of a Dress.

Here is the abstract for my talk:

Clothing is material memory, carrying the imprints of our body, absorbing sweat and stains, and straining with the stress of wear, especially at seams, hems and closure points. Although museums and study collections generally seek to collect items in near-perfect condition, there are stories hidden in the marks and stains of living. In a poetic essay, Peter Stallybrass describes how the clothes of his late colleague Allon White triggered sensory memories. “He was there in the wrinkles of the elbows, wrinkles that in the technical jargon of sewing are called ‘memory’; he was there in the stains at the very bottom of the jacket; he was there in the smell of the armpits” .

The Ryerson University Fashion Research Collection is a repository of several thousand garments and accessories acquired by donation, with the oldest garments dating back to 1860. For several years, this collection was dormant and largely unknown by the student body, and in editing the collection I examined each and every item within the storage facility. It was during the process of handling of each piece that I was haunted by the traces of the makers in the hand-stitching and the turns of the hem, and by the traces of the owners in the faint sweat stains under the arms and the worn patches at the elbows. There is such poignancy in these pieces, because they are still beautiful, but not to a pristine, museum-like standard. Some of these garments are in an advanced stage of decomposition, literally crumbling into dust due to the presence of weighted silk, and embody a duality of beauty and decay, life and death, emptiness and nostalgia, memory and transience. These fragments, which mirror the fragmentary nature of the records, became the source of my curatorial obsession.

In this project called Memories of a Dress, I created a series of photographs focusing on the rare historic garments in the Collection, and manipulated those images to suggest narratives that evoke the concepts of memory, fragility and transience. Roland Barthes in Camera Lucida defined photography as an artistic medium that was intimately linked with death as “a witness of something that is no more”, and this project fixes the process of decomposition in time, marking a moment that has already passed as the items continue on their trajectory into dust.
Posted by Ingrid Mida at 10:30 AM


As you may know, I am the Acting Curator/Collection Co-ordinator for the Ryerson Fashion Research Collection and recently started a Collection blog. This new blog at www.ryerson-fashion-research-collection.com is part of the effort to create a digital portal into the Collection and was supported by a grant from the Learning and Teaching Office at Ryerson University. I invite you to visit the blog and subscribe by email if you wish to receive the posts that way. I'll be rolling out the 100 key artifacts over the course of the year. Here are some of my favourite dresses, although truth be told there are many more....

When I visit an exhibition of fashion in the museum, I am often tempted to buy the exhibition catalogue, but sometimes they are so heavy that I know that it will tip my luggage into the overweight category. At those moments, I often will buy a handful of postcards - just to remember the highlights. I have a box full of them and I also occasionally get one in the mail (like the beautiful one from the Museum of Costume in Bath, which I have yet to visit).

Here are some of my favourite fashion postcards.

A Summary of Fashion Exhibitions

I recently wrote an essay on Fashion + Curatorial Practice for an upcoming book called Fashion + X - The Medial Interactions of Clothing edited by Dr. Rainer Wenrich. In attempting to figure out how to approach the topic of fashion in the museum, I looked back at the many fashion exhibitions that I've visited and written about since 2008. I thought it would be fun to revisit those here. The links are active and will take you back to my review and more pictures!

Email ThisBlogThis!Share to TwitterShare to FacebookShare to Pinterest
Labels: Fashion Exhibitions, Fashion in the Museum, Fashion is my Muse., Ingrid Mida

What's on the Fashion Calendar in September 2013?

Other than the rollout of Fashion Weeks around the world, there is a long list of fashion-related events and exhibitions on the calendar for September 2013. My picks for the month include:

This is the first major exhibition to explore the global circulation of design through the trading of textiles from the 16th to the early 19th century through the medium of textiles.  This exhibition features 134 works in order to tell the visual history of design, exploring the interrelationship of textiles, commerce, and taste.


September 18, 2013: The Opening of Farandole: Perspectives on Western Metis Culture at the Textile Museum of Canada.

This show, a combination of textile art, fashion and art installation, promises to be a visual feast -- combining the couture garments crafted by French fashion designer and embroiderer Pascal Jaouen adjacent to a room-sized embroidered textile installation by Franco-Manitoban visual artist Colette Balcaen.

At this annual conference of the mid-west section of the Costume Society of America, I will present "Memories of a Dress".


September 25, 2013: David Bowie at the Art Gallery of Ontario in Toronto.

On its first stop on its world tour, this exhibition from the Victoria and Albert Museum celebrates the David Bowie's collaborations in the fields of fashion, sound, theatre, art and film. presenting more than 50 stage costumes plus music videos, set designs, photographs and excerpts from films and live performances. Organized thematically, the show immerses visitors in a spectacular and interactive trip through Bowie’s numerous personae and legendary performances, with particular attention paid to his artistic influences. (And of course, if you have not seen it yet,  combine your visit with a tour of Ai Weiwei: According to What? also at the AGO).

After being closed for several years, curator Olivier Saillard will reopen the newly renovated galleries of the Palais Galliera with a retrospective of the work of designer Azzedine Alaia. On display will be 70 garments tracing the trajectory of the designer's career set amongst a scenography by designer Martin Szekely. Alaia is known for his highly sculptured dresses that hug every curve, articulated through his mastery of cut.