I was in New York on the weekend and did a fair share of gallery hopping including a retrospective of Elizabeth Peyton's work at the New Museum of Contemporary Art. "The Live Forever: Elizabeth Peyton" show, sponsored by Banana Republic, features about 100 of her intimate portraits of friends, family and figures from the worlds of art, fashion and politics.

I knew that she painted rock stars but I wasn't aware that she was also fascinated by royalty. What a lucky coincidence for me to discover two paintings of Marie Antoinette painted by Elizabeth Peyton. 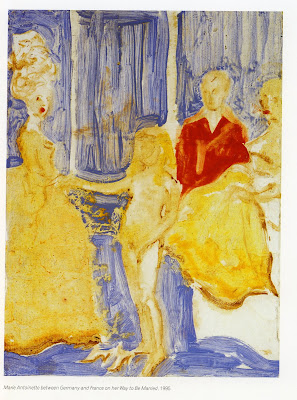 This small 8x6 inch oil painting by Elizabeth Peyton from 1995 is called "Marie Antoinette between Germany and France on her Way to be Married". 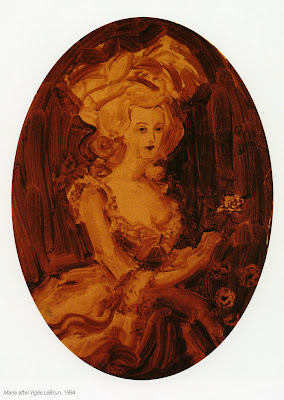 This oil painting of Marie Antoinette by Elizabeth Peyton from 1994 is titled "Marie after Vigee LeBrun".

I have always admired Elizabeth Peyton's loose, emotive style and had bought a book called "Elizabeth Peyton" (Rizzoli, New York, 2005) several years ago. Not having seen any of her work except in the book, I had the mistaken impression that Peyton's portraits would be on huge canvases and at the show I was surprised to see the small, intimate size of her paintings.

It inspired me to try Peyton's free and loose style of brushwork and I dashed off a painting based on photos of Anne Hathaway dressed as "Queen Anne" in W Magazine last month. 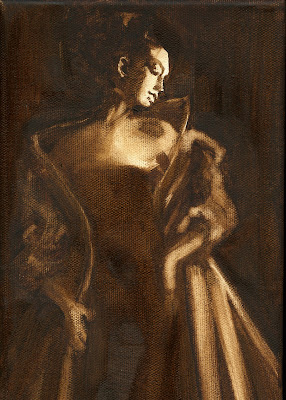 I would recommend a visit to the New Museum of Contemporary Art in New York to see the show of Elizabeth Peyton's work which spans two floors. The show is on until January 11, 2009. But if you cannot go in person, I recommend buying the book "Elizabeth Peyton". It is definitely the next best thing to being there.