Paper dresses were a huge phenomena in the mid 1960s. Initially created in 1966 by the Scott Paper Company as a marketing gimmick to promote a new type of paper, they were an instant hit.

In this era of political and social upheaval, dress codes were turned on their heads. Released from the narrow constricts of what was considered acceptable attire, women quickly adopted the freedom of these cheap and sexy paper dresses.

Other companies began to advertise their products on paper dresses and dresses sported a wide variety of patterns and images including products (like cookies, candy, soap and the Yellow Pages), political messages (Nixon, Kennedy, McCarthy and Trudeau), film and magazine promotion (Universal Studios, Time Magazine), and artistic expression (Andy Warhol, James Rausenquist). Often these dresses were free or cost no more than $1.

In the era of throwaway living, these dresses were designed only to be worn once or twice and that was a big part of their appeal. Apparently you could even chose a dress to match the cups, serviettes and tablecloths for your party. After the party was over, you could just rip off your dress and throw it in the bin along with the deleterious of the night. 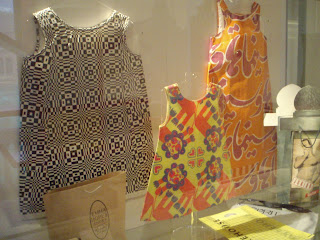 Paper dresses on display at the Victoria and Albert Museum
Photo by Ingrid Mida, 2008

As the textile industry began to develop cheaper fabrics for ready-to-wear clothing, the appeal of the paper dress began to lose popularity.

There was an exhibition of paper dresses on display at The Grand Duke Jean Museum of Modern Art (MUDAM) in Luxembourg which closed this past week. The show called "RRRIPP!!! Paper Fashion" included many sixties paper dresses as well as paper fashion from contemporary fashion designers such as Hussein Chalayan's 1999 Airmail dresses (dresses made of notepaper which could be written on and then folded and sent by mail).

Currently in transit, the show will move into the Fashion Museum in Antwerp (MOMU) from March 12-August 16, 2009. The last stop will be the Design Museum in London late 2009 to early 2010.

I read an article about the show in a European art/fashion mag called nico:interviews and fashion. The interview of the show's curator Vassilis Zidianakis was written by Celine Coubray in French.

I wish I could travel to see this show. I've been making miniature paper dresses and corsets for almost two years as part of my artistic practice. To me working in paper encapsulates the inherent fragility of fashion and creating these miniature works translates them into precious objects of art. Unfortunately, I was not one of the artists asked to create or submit a work of art for this show, but it does reiterate that I am on the right track. 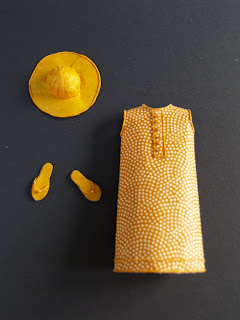